Ok, we can all agree that a LOT happened in Berlin. To study all the major events that took place in our city in 20th century alone could take you years. So we’re not conducting a proper detailed history class here, but we do want to help you prepare for your Berlin trip by sharing what we think are the 10 most remarkable and important events in the history of Berlin.

Berlin and the bear
In the 11th and 12th century two towns were founded along the river Spree; the original Slavic town Berlin and a second town, Cölln. The area came under German rule as part of the Margraviate of Brandeburg, founded by Albert the Bear in 1157. It was Albert the Bear who gave Berlin the bear emblem. The two towns merged formally in 1432 into Berlin-Cölln with a little over 8000 inhabitants at the time.

The Hohenzollerns
In 1415 Frederik I became the first elector and his Hohenzollern descendants would rule Berlin as Kings of Prussia and finally as German emperors 1918. The last Hohenzollern emperor was Kaiser Wilhelm II. Being British Queen Victoria’s favourite grandson and Tsaar Nicolas’ cousin didn’t prevent this Kaiser from wanting to test the full potential of the German fleet and military. After four years of horror war throughout Europe, Kaiser Wilhelm II resigned in 1918 ending more than 500 years reign by the Hohenzollern.

Napoleon and city reforms
Prussia was defeated by Napoleon’s forces at Jena, 400km southwest of Berlin in 1806. On 27 October in 1806 Napoleon marched through the Brandenburger Gate. It would be the beginning of a three-year occupation of Berlin. The financial burden of war reparations and citizens having to take French troops into their home was humiliating for most Berliners. But Napoleon also created a city administration giving Berlin a first taste of self government with elected mayors.

The German empire
King Wilhelm succeeded his brother King Friedrich Wilhelm IV who suffered from a stroke in 1861. He appointed Otto von Bismarck as Prussian prime minister. Von Bismarck would be the founding father of the ‘Deutches Reich’ (‘German Empire’, that would last until its downfall in 1945), waging war against Denmark, beating Austria and isolating France. On January 1871 King Wilhelm was crowned Kaiser at Versailles and Bismarck was made his ‘Iron Chancellor’. In March 1890 however, Kaiser Wilhelm II excised the chancellor from the political scene due to the chancellor’s aversion to real reform and antisocialist beliefs.

The Weimar Republic
At the end of World War I, the monarchy was overthrown. Kaiser Wilhelm II fled into exile in The Netherlands and never returned to Germany. Germany was proclaimed a republic known as the Weimar Republic. Berlin became a fertile ground for artists, innovators, designers and intellectuals. Nine Germans were awarded a Nobel prize during the Weimar Republic.

Hyperinflation
Due to the humongous debts of the war and the treaty of Versailles that demanded huge reparation fees that Germany would never realistically be able to repay, by September 1920 prices were 12 times as high as they had been before the war. The presses of the Reichsbank could not keep up though they ran through the night. Individual cities and states began to issue their own money. By the end of 1923 prices were 726 billion times as high as in 1914. In November 1923, a currency reform took place; the introduction the Rentenmark, money that was exchangeable for bonds supposedly backed up by land and industrial plant. The Rentenmark and the passage of the Dawes Plan in 1924 caused the depreciation to cease.

The Great Depression
The fun came to an instant end wgen in 1929 Berlin is hit by the Great Depression due to the crash of the US stock market. Over 650 businesses go bankrupt, half a million people are unemployed. Demonstrations, general unrest and violence follow. More than 30 people are killed in the “Bloody May” of 1929. The following November, the NSDAP (National Socialist Party)gets 5.8% of the votes and wins 13 seats in Berlin’s parliament. Unemployment figures rise to 650.000 by 1932, violence and demonstrations increase and the NSDAP receives 26% of the votes.

The National Socialist Era and World War II
In 1933 the takeover of the National Socialists ends the Weimar democracy.  Faced with failed economic reforms and persistent right-wing advisors president Paul von Hindenburg appoints Adolf Hitler as Germany’s chancellor on January 30 1933. On 27 February a mysterious fire breaks out at the Reichstag. Hitler blames the communists and persuades the president to grant him ‘emergency powers’ to prevent riots. The Nazi dictatorship officially begins.

On March 21, the first concentration camps for opponents of the regime opened just outside of Berlin.

In August 1936, the Olympics take place in Berlin. Hitler saw the games, the first ever with live television coverage to reach 41 countries, as a perfect opportunity to promote his ideals of racial supremacy. Controversy surrounded Jesse Owens victory in the 100 meter Sprint in front of Adolf Hitler.

Berlin becomes the capital of the Great German Reich with the annexation of Austria on March 12 1938. On November 9 of that year – known as ‘Kristallnacht’ – synagogues are set on fire, Jewish shops are looted and 1200 Jews are arrested and taken to concentration camps by the SS.

World War II starts with the invasion of Poland on September 1 1939. Belgium, The Netherlands and France fell quickly and in June 1941 Germany attacked Russia as well (ending with a defeat in Stalingrad in1943).

On January 20 1942, the so-called  Endlösung (‘final solution’) – the decision to annihilate all Jews – is approved in the SS villa on the Wansee Lake in Berlin.

On February 18 1943, after a catastrophic defeat of the German army in Stallingrad, propaganda minister Joseph Goebbels calls for ‘total war’ at Berlin’s Sportpalast.

There were over 40 documented attempts on Adolf Hitler’s life. Colonel Von Stauffenberg’s attempt to assassinate Hitler, known as ‘ Operation Valkyrie’ just fails on July 20 1944. His primary purpose of the assassination was to seize political control from the Nazi Party in order to obtain peace with the western Allies as soon as possible. Von Stauffenberg and his co-conspirators are shot at the Bendlerblock building in Berlin.

With the Normandy invasion on June 6 1944, Allied troops finally arrived full force, supported by air attacks and Sovjet troops closing in from the east early 1945. When the Red Army enters Berlin on April 21 1945, the Battle of Berlin begins. The battle ends with the city’s surrender on May 2. Hitler had committed suicide just 2 days earlier on April 30. The capitulation treaty is signed by representatives of all Allies on May 8.

In the years after World War II Berlin became the Cold War hot spot as tensions between Allies grows. In 1949 the division of Germany into West (BRD) and East (DDR) was formalised. The Marshall Plan invested in reconstruction of West Germany and resulted in a booming econonomy (‘Wirtschaftswunder’). Meanwhile, in the Soviet zone, the economy was far less flourishing and dissidents were oppressed by the notorious Stasi (Ministry for State Security). A famous 1953 workers strike was quashed by executions and lifelong prison sentences.

The Berlin Wall
By 1951 East Berliners would need a permit to visit family in the West. However, as more and more young and educated people started to flee the DDR, the Soviets needed stronger measures. On August 13 1961, the construction of the Berlin Wall commenced. Almost 200 attempts to cross to the West would end in execution. In 1963, the famous ‘Ich bin ein Berliner’ speech by US president Kennedy supporting the freedom advocators made Berlin one of the lead characters of the Cold War. The Wall collapsed on 9 November 1989. 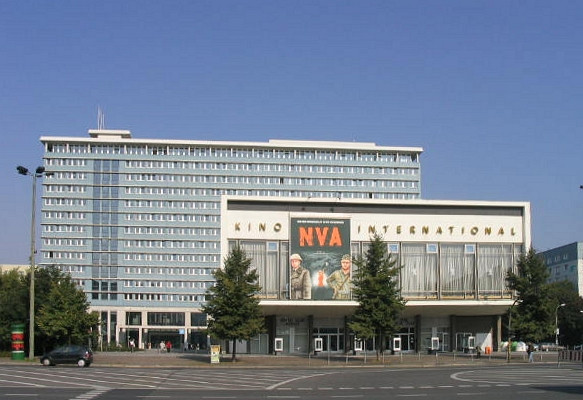