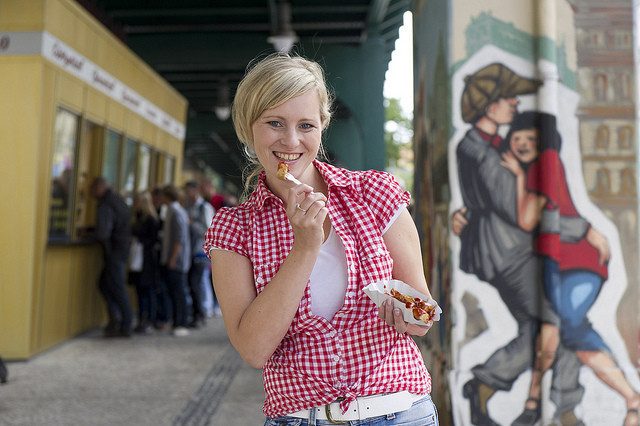 Long before the Berliner cuisine became this modern and contemporary fusion, the local classic consisted of a fast, rudimentary and simple kitchen. To accompany it herbs and apple-based drinks and – who could’ve guess – the good old friend beer. For travelers in the mood to try those traditional flavors of the city the Amstel House has prepared a list of the most typical Berlin food and drinks. Enjoy it! Mahlzeit!

Currywurst
The famous German sausage gets in Berlin a different twist: a ketchup-curry sauce. To enjoy a complete meal order it with pommes (french fries).
The best address in Berlin: Konnopke’s Imbiss

Döner Kebab
born in Berlin in the 70s the Döner Kebab is maybe the biggest current symbol of the cultural mix between Germans and Turks. A yummy and cheap meal that can be found all around the city.
Amstel recommendation: one of the best is just around the corner – also in vegetarian version: Favorite Gemüse Kebab at the Turmstraße 41

Berliner
The German donuts are so praised in the city that they were enacted – as the name says – local citizens. With no hole in the middle, filled with jam or marmalade and covered with sugar on top it is a must to smear yourself with this pastry while visiting Berlin.
Where to get it: Thoben`s Backwaren at the Arminius Markthalle

Bockwurst
Claimed by both Bavarians and Berliners, the Bockwurst belongs to the group of over-loved things. We cannot say where it comes from, but we can assure it is worth the bite. Around Alexander Platz you will find plenty walking stands selling it for less than a euro.

Senfeier
Grandmother’s recipe this dish is for most Berliners a good childhood remembrance. Made from eggs, potatoes and mustard it may look strange, but it is very delicious.
The best place to eat it in Berlin: Mirika.

Buletten
Better known as Frikadeller and as a Danish dish the pan-fried meatballs won so much the heart of the Germans that it became a local passion. Better with mustard and red cabbage.
Find it at the Becker’s Hallenimbiss at the Arminius Markthalle

Fassbrause
Known as one of the favorite lemonades around the Fassbrause was born and raised in Berlin as a none-alcoholic beer. Made out of herbs, fruits, sometimes apple juice and malt it has beer-like taste and color, but can however be served to kids. Great for hangovers.
To be found in every traditional German Restaurant

Berliner kindl weisse
One of the sweetest beers in the Berlin menu, available in two flavors and funky colors: raspberry in red and woodruff in green. Best to drink it in sunny afternoons and with a straw at one of Berlin’s charming beer gardens.

Mexikaner
Originally from the bohemian scene of Hamburg the tasty and cheap drink entered the bars of Berlin to stay. Made with vodka or corn, tomato sauce, sangrita, tabasco, salt and pepper this shot is for those who have stomach. Prost!
At the Amstel Bar!

Radler and Diesel
This might chock some. But it is a German habit to mix soda and beer. In fact the right way to describe it is that beer is often added to soda, not the other way around. If you are in the mood to venture into that taste order at any bar Diesel for cola with beer, and Radler for beer and limo. 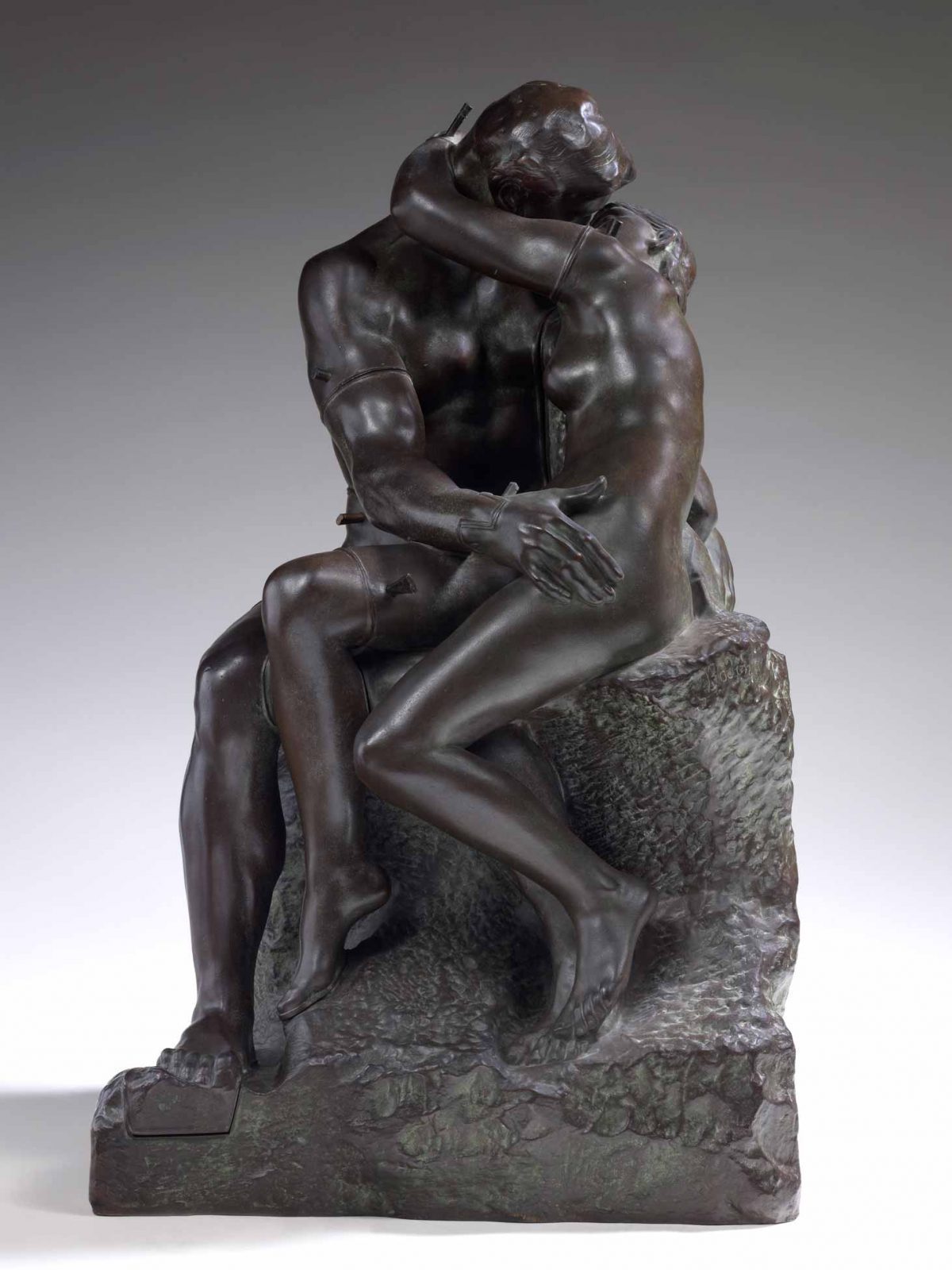 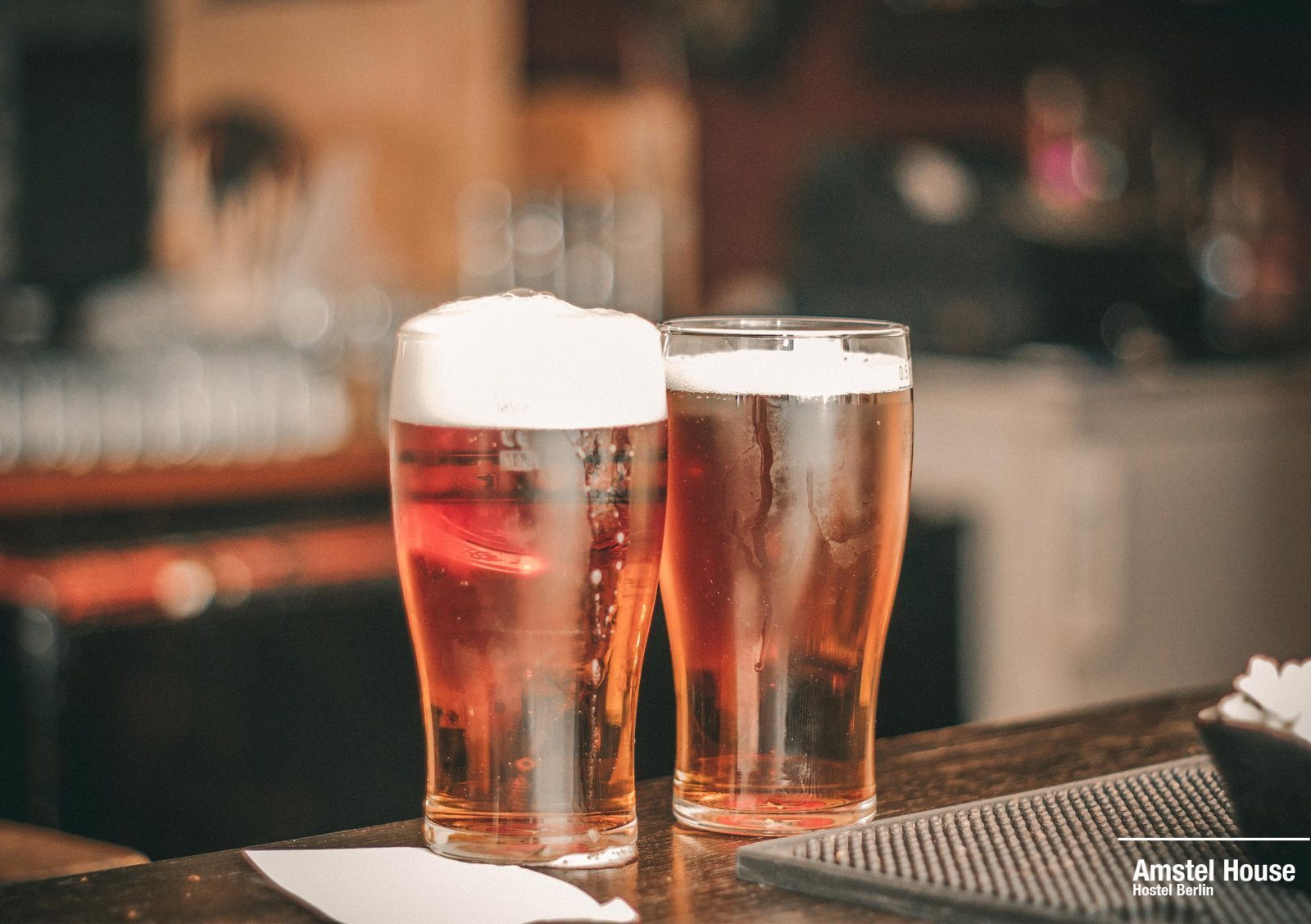