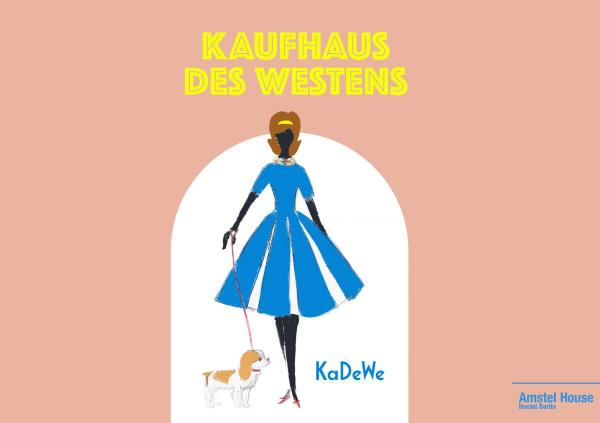 KadeWe Berlin – short for Kaufhaus des Westens (German for department store of the West) – is Germany’s most iconic department store. It’s architecture, its history and its luxurious assortment make it a tourist attraction in itself. And even though the products on the shelves might be a little out of your league, comfort zone or taste, it’s well worth a visit. But before we indulge ourselves in a shopping spree, let’s learn more about this legendary 65.000 m2 shop.

Entrepreneur and merchant Adolf Jandorf ordered KaDeWe to be built in 1907. He briefed architect Emil Schaudt to build a spacious, contemporary design. Elite shoppers from near and far came to socialize and see its curated collection. From the latest fashion design collections from Paris to rare exotic fruits to a library, KaDeWe offered visitors something they’d never experienced before.

In 1927 Hermann Tietz took over and modernized and expanded KaDeWe successfully. In the 1930s however the Nazi’s forced Herman Tietz and his partners to step down as the partnership was largely jewish. During the World War, heavy bombings destroyed most of the store. An American bomber actually crashed into the KaDeWe Berlin in 1943. Full renovation and opening of all floors was celebrated in 1956. KaDeWe would become the symbol of Western prosperity and economic power. Just after the fall of the wall, KaDeWe Berlin would be visited by over 200.000 guests a day.

In 2016, famous Dutch architect Rem Koolhaas and his team started to reconstruct the KaDeWe interior, keeping it versatile and contemporary for years to come.

Today, you can still indulge yourself in delicious, exotic food and a serious dose of retail therapy at KaDeWe Berlin. From Prada to Armani, Bulgari and Chanel to food halls on the top floor filled to the brim with gourmet tastings. So for a true shopping extravaganza, visit Kurfürstendamm’s KaDeWe.